So, You Think You Know Everything???

A dime has 118 ridges around the edge.

A cat has 32 muscles in each ear.
A crocodile cannot stick out its tongue.
A dragonfly has a life span of 24 hours.
A goldfish has a memory span of three seconds.
A "jiffy" is an actual unit of time for 1/100th of a second.
A shark is the only fish that can blink with both eyes.
A snail can sleep for three years.
Al Capone's business card said he was a used furniture dealer.
All 50 states are listed across the top of the Lincoln Memorial on the back of the $5 bill.
Almonds are a member of the peach family.
An ostrich's eye is bigger than its brain.
Babies are born without kneecaps. They don't appear until the child reaches 2 to 6 years of age.
Butterflies taste with their feet.
Cats have over one hundred vocal sounds. Dogs only have about 10.
"Dreamt" is the only English word that ends in the letters "mt".
February 1865 is the only month in recorded history not to have a full moon.
In the last 4,000 years, no new animals have been domesticated.
If the population of China walked past you, in single file, the line would never end because of the rate of reproduction.
If you are an average American, in your whole life, you will spend an average of 6 months waiting at red lights.
It's impossible to sneeze with your eyes open.
Leonardo Da Vinci invented the scissors.
Maine is the only state whose name is just one syllable.
No word in the English language rhymes with month, orange, silver, or purple.
Our eyes are always the same size from birth, but our nose and ears never stop growing.
Peanuts are one of the ingredients of dynamite .
Rubber bands last longer when refrigerated.
"Stewardesses" is the longest word typed with only the left hand and "lollipop" with your right.
The average person's left hand does 56% of the typing.
The cruise liner, QE2, moves only six inches for each gallon of diesel that it burns.
The microwave was invented after a researcher walked by a radar tube and a chocolate bar melted in his pocket.
The sentence: "The quick brown fox jumps over the lazy dog" uses every letter of the alphabet.
The winter of 1932 was so cold that Niagara Falls froze completely solid.
The words 'racecar,' 'kayak' and 'level' are the same whether they are read left to right or right to left (palindromes).
There are 293 ways to make change for a dollar.
There are more chickens than people in the world.
There are only four words in the English language which end in "dous": tremendous,    horrendous, stupendous, and hazardous.
There are two words in the English language that have all five vowels in order: "abstemious"    and "facetious."
There's no Betty Rubble in the Flintstones Chewables Vitamins.
Tigers have striped skin, not just striped fur.
TYPEWRITER is the longest word that can be made using the letters only on one row of the keyboard.
Winston Churchill was born in a ladies' room during a dance.
Women blink nearly twice as much as men.

Your stomach has to produce a new layer of mucus every two weeks; otherwise it will digest itself.

now... you know everything!
Posted by Sylvia K at 5:00 AM 9 comments: Links to this post

How About These Horses!!! Pretty Incredible!! 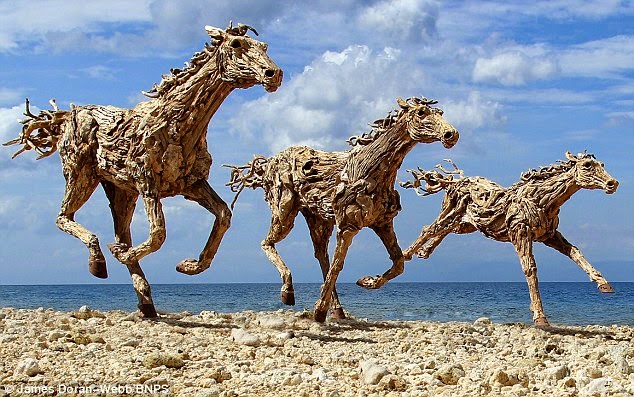 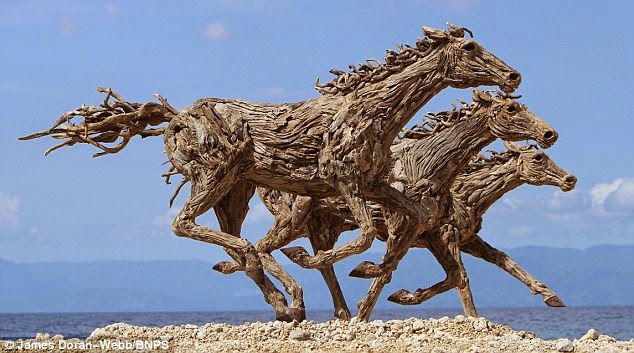 He said: 'Putting the driftwood onto the sculpture took about three months. The large bits go on first followed by the more intricate pieces.'

Each horse is made from 400 pieces of driftwood of varying sizes built around a stainless steel skeleton. The wood he uses in his sculptures has been salvaged from beaches and rivers around Cebu by a network of locals who Doran-Webb pays to collect it. For every kilo of wood salvaged, he plants a seedling at one of several sites around the city.

He said: 'The three thoroughbred horses are my latest driftwood creation... Each horse took two months to make and contains about 400 pieces of driftwood of varying sizes.'

'By the time they are finished each one weighs 500kgs and can carry the weight of four or five people,' he added.

Doran-Webb went on to say: 'I started off collecting the driftwood myself in my kayak but now I have a network of locals who I pay to collect it for me which helps put money back into poor communities.

The wood Doran-Webb uses for his sculptures is around 50 years old, and according to the craftsman it is ideal to work with. He said: 'It is an oily wood so it withstands weather and it is very tensile - it's a dream to work with.'

'I started out with sketches of the horses then once I was happy with them I made miniature models of them, which took a month on its own,' he added.

Doran-Webb said the next step was to make a large plywood template to weld the stainless steel frame onto.


I'm not saying let's go kill all the stupid people. I'm just saying let's remove all the warning labels and let the problem work itself out.

I changed my car horn to the sound of gun shots. People move out of the way much faster now.

You can tell a lot about a woman's mood just by her hands.
If they are holding a gun, she's probably angry.

Gone are the days when girls used to cook like their mothers. Now they drink like their fathers.

You know that tingly little feeling you get when you really like someone?  That's common sense leaving your body.

I don't like making plans for the day because then the word "premeditated" gets thrown around in the courtroom.

I didn't make it to the gym today. That makes five years in a row.

I decided to change calling the bathroom the John and renamed it the Jim.  I feel so much better saying I went to the jim this morning.

Paranoid people who check behind shower curtains for murderers - BTW: if you
find one. what's your plan?

"A gun is kind of like a parachute. if you need one and don't have one, you'll probably never need one again".

Yes, I'm being naughty today!  It's necessary every now and then!
Cheers!
Posted by Sylvia K at 5:00 AM 7 comments: Links to this post

Happy Tuesday!! How About These Magical Houses!!!

And I sing of furry, hungry squirrels!!!
Posted by Sylvia K at 4:00 AM 34 comments: Links to this post 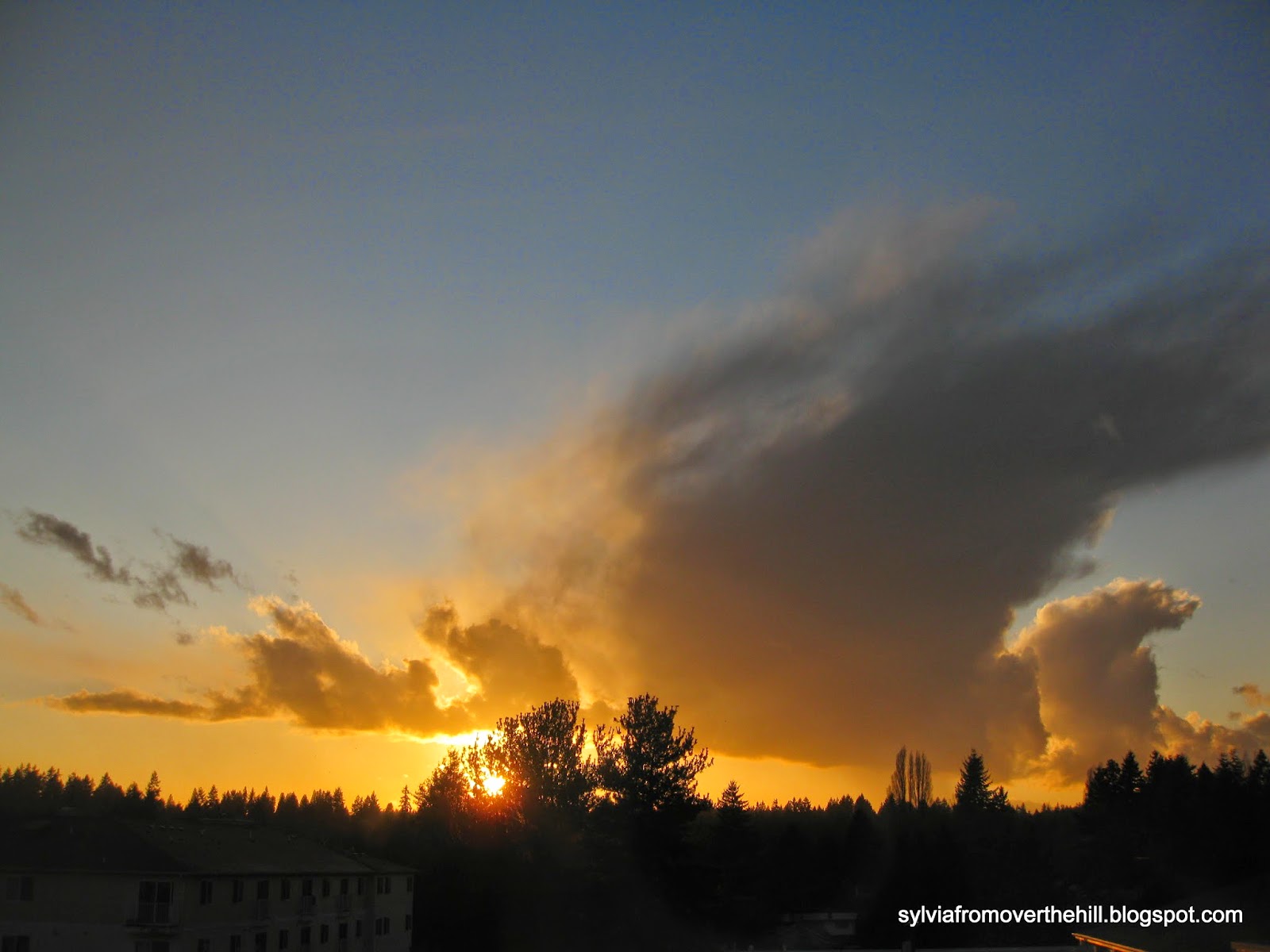 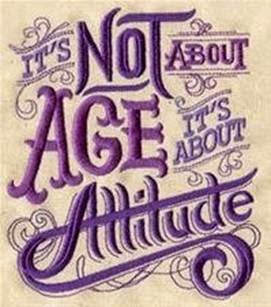 May all of you have a peaceful evening with lots of love, joy and beauty!!
Posted by Sylvia K at 4:00 PM 4 comments: Links to this post

Some Wisdom and Beauty for the Day! 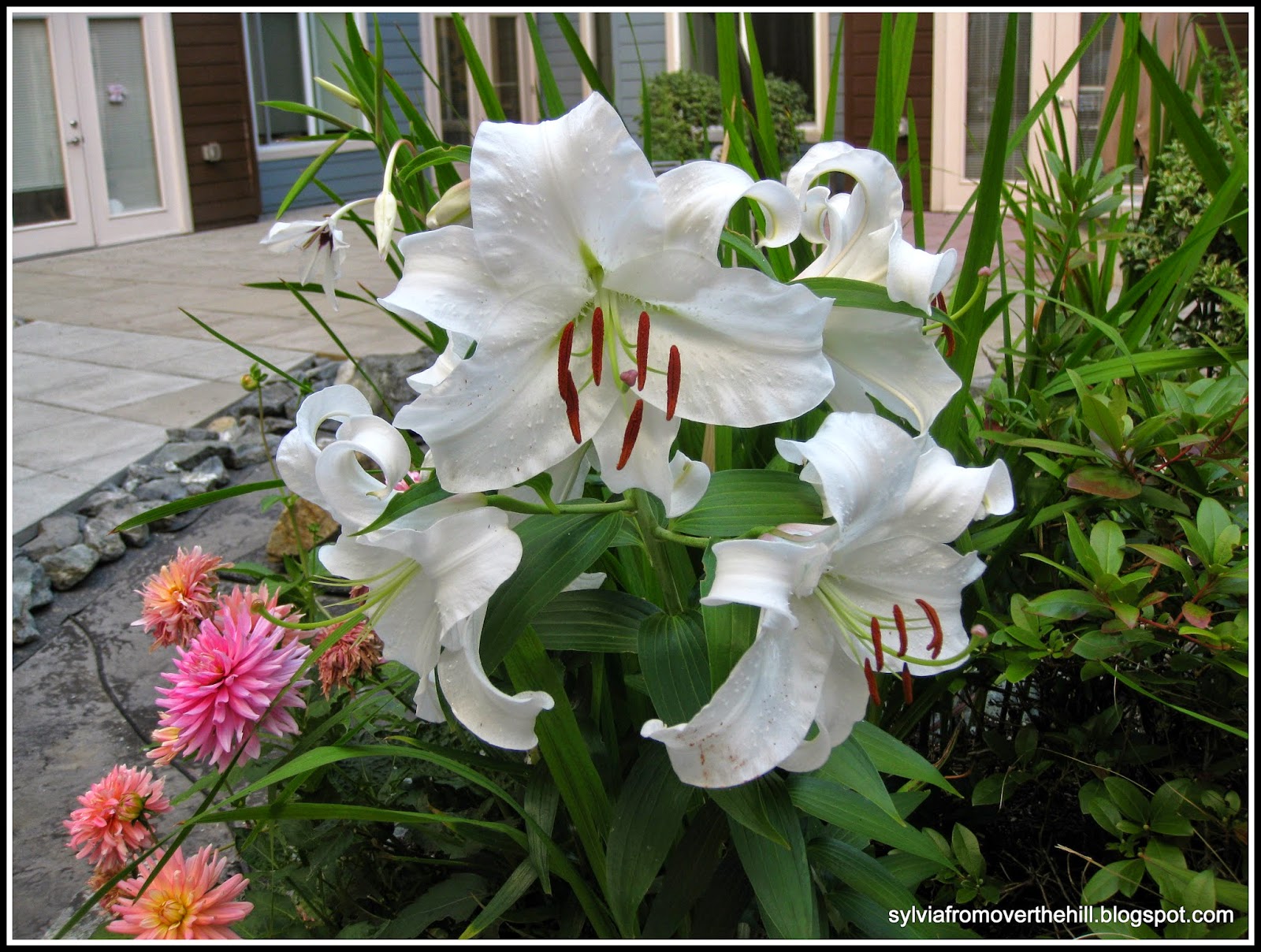 Ralph Marston
Posted by Sylvia K at 4:00 AM 12 comments: Links to this post