That's My World is sponsored each week by Klaus, head of the My World team along with Sandy, Wren, Fishing Guy, Louise and myself. It's a great opportunity to "visit" many places all over the world as well as giving each of you a chance to show your world. Click on the icon and sign up. Please do read the rules and instructions!

I'm going back a long way today, but it was and is a totally fascinating place. In my early twenties I lived and worked in New Orleans, Louisiana. I had visited there when I was a senior in high school and always loved it's history, so when the opportunity presented itself, I went eagerly. The photos and history are courtesy of Google and Wikipedia. 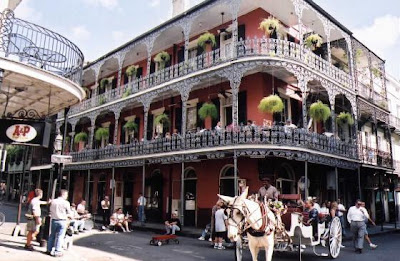 La Nouvelle-Orléans (New Orleans) was founded May 7, 1718, by the French Mississippi Company, under the direction of Jean-Baptiste Le Moyne de Bienville, on land inhabited by the Chitimacha. It was named for Philippe II, Duke of Orléans, who was Regent of France at the time. His title came from the French city of Orléans. The French colony was ceded to the Spanish Empire in the Treaty of Paris (1763) and remained under Spanish control until 1801, when it reverted to French control. All of the surviving 18th century architecture of the Vieux Carré (French Quarter) dates from this Spanish period. Napoleon sold the territory to the United States in the Louisiana Purchase in 1803. Thereafter, the city grew rapidly with influxes of Americans, French, Creoles, Irish, Germans and Africans. Major commodity crops of sugar and cotton were cultivated with slave labor on large plantations outside the city. 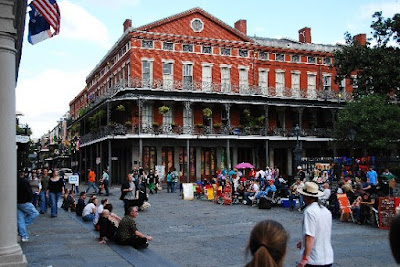 As a principal port, New Orleans played a major role during the antebellum era in the Atlantic slave trade. Its port handled huge quantities of commodities for export from the interior and imported goods from other countries, which were warehoused and then transferred in New Orleans to smaller vessels and distributed the length and breadth of the vast Mississippi River watershed. The river in front of the city was filled with steamboats, flatboats, and sailing ships. Despite its dealings with the slave trade, New Orleans at the same time had the largest and most prosperous community of free persons of color in the nation, and who were often educated and middle-class property owners. 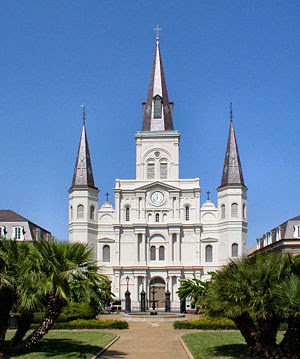 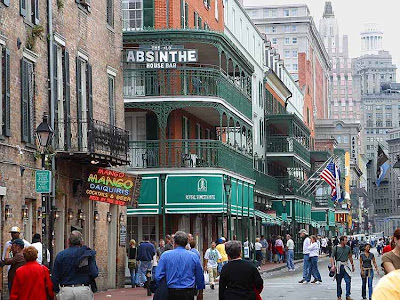 Because of the low sea level in New Orleans, the dead are buried above ground and the old cemeteries are quite fascinating. One of the most visited ones is the crypt where Marie Laveau is buried. She supposedly was born in New Orleans in 1794 and was considered a free woman of color. Being a mulatto, that being the name given to people of mixed black, white and sometimes Indian blood. Sometimes she was described as a descendant of French aristocracy or a daughter of a wealthy white planter. This was very common at that time. She was and still is by some, considered to be the ultimate queen of voodoo. 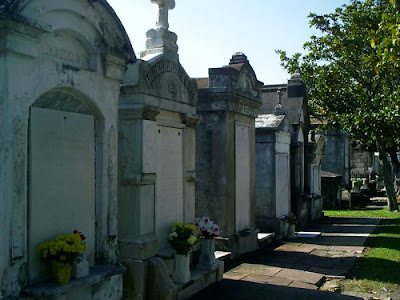 And everywhere there is street music. 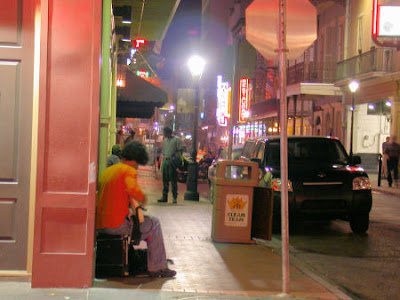 With places like Bourbon Street, Jackson Square and the French Market, restaurants like Antoine's, Galatoire's, and Arnaud's there's never a lack of fascinating places to go. I don't care for it as much today as it has not only suffered Katrina, but has become in some ways a sleazy, tourist trap. That wasn't the case when I lived New Orleans and each time I went to the French Quarter it was like stepping back into history and I loved it! 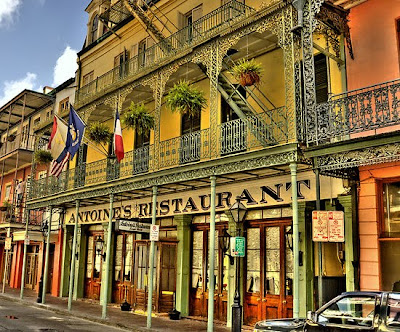 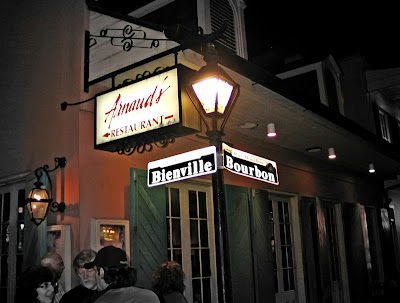 I'm so glad we got to see New Orleans before the flooding. It is such a rich and incredible place. I can't imagine wanting to live there though unless you do something like the Dutch.

I love New Orleans and the architecture of the French Quarter.
Have a good week.

New Orleans is a beautiful city. I'm so glad you posted this. What a fun place to visit :)

I would love to visit New Orleans. Beautiful photos, Sylvia!

interesting place, never been there...thanks for the info.

Very detailed post with beautiful snaps of New Orleans. I loved the history of the place.

We were in New Orleans a year before the flooding. We had a great time. Thanks for bringing them back.

Oh this was perfect timing, Sylvia! I discovered a while back that I love New Orleans (but have not been there). In fact, was just having a discussion on FB this morning about movies set/filmed there. Seeing these photos was a real added treat!

Hi Sylvia! New Orleans is certainly a very interesting city with a fascinating and old history. I should like to go back in time too, but with the knowledge of today.

You have certainly lived in some wonderful places, Sylvia. New Orleans is another place I would dearly love to visit.
Janice.

I've never been to New Orleans bit I've always been fascinated by it's unique history and culture.

You have lived at so many interesting places and we benefit from your showing them to us. Great shots of New Orleans and as always an interesting post.

Beautiful photo's of a beautiful place.

An interesting post. When we visited several years ago I thought it had a bit of a "Disneyland" feel to it. I would imagine it is quite different if you live there.

Fabulous (spelling?) pictures! I am sure I would love NO!!! Today I spent my day Listening to Fats Domino - isn't he a bit NO?
Take care and have a great day in NO!

I always wanted to visit too. I hope an opportunity presented itself to me too.

BTW, was there a HOUSE OF THE RISING SUN in New Orleans? You the lyrics of the song that went ...there is a house in New Orleans, they called the rising sun!

A must visit city, I guess even more so now that the people are trying to rebuild.

Thanks for sharing some history of yet another place you've called home. Like me, you've certainly seen a bit of the World.

Ban the cars like your photos show and you are transported in a Time machine.

This looks like Disney land when I went 15 years ago with my girls. It is so beautiful.

Very interesting and beautiful shots, I would love to visit.

Hi Sylvia, I love New Orleans. I have been there many times but not since Katrina. I have always thought the place was enchanted and never get tired of walking the streets and looking in the shops and the great restaurants. Great post. I really enjoyed it.

New Orleans looks like a wonderful city. Your photos are fantastic.

What a stunning place. I love the journeys you take us on!

I have never been to the Big Easy and really want to go someday. Marvelous post!

Say - I'm trying to post (been trying since this morning) to the 'That's My World Tuesday' site but can't get to the Mr. Linky...now it looks like no one has posted. Any idea what's going on there? Thank you, Sylvia.
Sistertex (Spacial Peepol)

Wow! Shots from New Orleans! Thanks for these and the effort you took on presenting its history too.

Sylvia thanks for the tour.Been a long time since I was in New Orleans almost a lifetime. Savannah Georgia is another southern city I really like.

What a beautiful place with an interesting history. I didn't know much about New Orleans apart from the flooding. Thank you for sharing this.

that was so interesting

I haven't been back to NOLA since Katrina. It was always a fun place to visit. I enjoyed your memories!

I spent my teenage and college years in New Orleans. I've had ancestors living there for a couple of hundred years, so it's a very special city to me. Enjoyed your photos!

So many beautiful buildings.
Sydney - City and Suburbs

Delightful post! I have been there twice 40+ years ago. It was a beautiful city and I hope some of that historical side is restored.

I haven't been back since the flood, and I'm not sure I'm ready to see the changes.

I have not been there, but the sights make me want to visit New Orleans. I only see these in the movies!

Lovely architectural designs. We always want structures and setting like this are preserved to be appreciated by generations to come. Neat photos.

I find New Orleans fascinating and unique from its other counterparts and it's a place I'd like to see more someday. thanks for visiting my blog:)

One of the fascinating things about New Orleans is it's so unlike the rest of the states.

Your photos of New Orleans remind me of the way it was when I visited decades ago. Thanks for the memories.
Hugs and blessings,
Happily Retired Gal